The Reactant Dynamo is one of the Dynamos added by Thermal Expansion. It generates Redstone Flux using alchemical reactions between fluid fuel and solid reactants. Automating energy generation with Reactant Dynamos can lead to interesting setups, as the Dynamo uses somewhat unusual kinds of fuel.

The Reactant Dynamo generates energy using fluid fuel and reactant items. It does not work if there is fuel but no reactant in it, and vice versa; the Dynamo essentially consumes two kinds of fuel simultaneously.

The Reactant Dynamo generates energy at a maximum rate of 80 RF per tick. This rate may decrease depending on how full the Dynamo's internal storage is, which can fill up if the Dynamo cannot emit its energy. The rate may be reduced down to a minimum of 8 RF per tick. At this point, generated energy that cannot be stored anywhere is lost.

Energy generated by the Reactant Dynamo is stored in the Dynamo's internal energy storage. It is then emitted as soon as possible in the direction in which the Dynamo's red coil is pointing. The Dynamo does not emit energy if it is inactive, even if some generated energy is still stored in it.

The Dynamo accepts fluid fuel and reactant items from external sources like Machines or Ducts. These can be inserted on all sides of the Dynamo, except for the coil. However, if the Transmission Coil Ducting Augment is installed, that side may also receive them.

The below table lists the fluids that can be used as fuel for the Reactant Dynamo. It displays how much energy the Dynamo can generate from a Bucket (1000 mB) of each kind of fuel. Fluids that yield less energy are consumed more quickly.

The below table lists the items that can be used as reactants in the Reactant Dynamo. It displays how long each reactant lasts, expressed in the amounts of energy the Dynamo can generate with them. These energy amounts are not added to the amounts of energy generated using the above fuels.

Reactant items are currently not configurable. 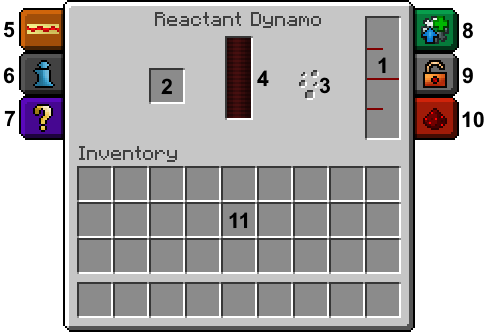