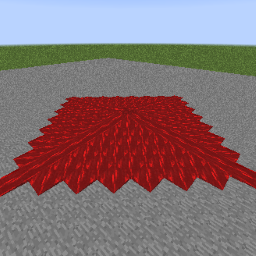 Destabilized Redstone is a fluid that is produced when the structure of solid Redstone collapses under extreme heat. It is much better at conducting Redstone Flux than solid Redstone.

The following table lists some details of Destabilized Redstone. The same details for Water and Lava are included for comparison.

Due to its high conductivity to Redstone Flux, Destabilized Redstone is often used to build advanced devices that can store or transport the energy. It is also a critical ingredient in creating the alloy Signalum and the equipment from Redstone Arsenal. Lastly, all of the elemental Powders in the mod can be created by infusing certain materials with the fluid using a Fluid Transposer.

When placed, Destabilized Redstone flows and can be swum in just like Water. It also emits a redstone signal, the strength of which depends on how far the emitting block is from the source block.

Destabilized Redstone can be drunk using a Straw. When done so, lightning strikes the player, setting them on fire for a short time. It also amplifies and extends any potion effects the player has, up to level IV for 8 minutes.