Augmentation is the act of installing Augments into Augmentable devices. Augments are a group of items that can be installed in Machines, Dynamos and certain Devices. When installed, they add more functionality to these devices or increase the power of specific existing functions.

This is not without its drawbacks, though. Augmentable devices can only have a very limited amount of Augments installed at once, and some Augments, while increasing the power of certain functions, have a negative effect on other aspects of the devices.

All Augmentable devices have the Augmentation tab in their GUIs. This tab contains slots in which Augments can be placed. 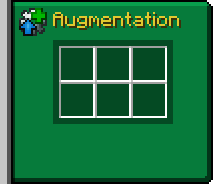 The amount of available Augment slots differs per device. Machines have three to six slots depending on the tier of Machine Frame, Dynamos have four slots, and all other devices have three slots.

Augments have a tier system of their own, called Levels. There are three possible Levels: I, II and III. Higher Level Augments usually do the same thing as their previous Level versions, except with greater stats.

When installing an Augment of Level II or higher, all previous Levels of the Augment must also be installed for it to work. However, only the installed Augments of the highest Levels are actually used. This means that the Level of an Augment determines how many Augment slots it occupies.

Some Machine-based Augments require Machines to have a minimum tier of Machine Frame for them to work. This requirement typically increases by one tier per Level.