The Steam Dynamo is one of the Dynamos added by Thermal Expansion. It generates Redstone Flux from Steam. Steam can be pumped in from external sources, but it can also be generated internally using Water and solid fuels.

Steam may be pumped into the Dynamo from external sources. The Steam Dynamo can also internally convert Water into Steam using solid fuels. In this case, Water must be pumped in or put in manually using Buckets. Aqueous Accumulators can be used to easily produce Water for this.

The Steam Dynamo generates energy at a maximum rate of 80 RF per tick. This rate may decrease depending on how full the Dynamo's internal storage is, which may fill up if the Dynamo cannot emit its energy. The rate may be reduced down to a minimum of 8 RF per tick. At this point, generated energy that cannot be stored anywhere is lost.

Energy generated by the Steam Dynamo is stored in the Dynamo's internal energy storage. It is then emitted as soon as possible in the direction in which the Dynamo's red coil is pointing. The Dynamo does not emit energy if it is inactive, even if some generated energy is still stored in it.

The Dynamo accepts Steam, Water and fuel items from external sources like Machines or Ducts. These can be inserted on all sides of the Dynamo, except for the coil. However, if the Transmission Coil Ducting Augment is installed, that side may also receive them.

The below table lists the items that can be used as fuel for producing Steam internally. It displays how much energy the Dynamo can generate from each kind of fuel. Items that yield less energy are used up more quickly.

Keep in mind that the Dynamo does not generate energy if less than 2000 mB of Steam is stored in its internal tank. Burning a piece of fuel will therefore not always yield the full amount of energy, as Steam is produced from burning fuel and then consumed to generate energy.

*: May be changed in the config.
**: Wooden tools, Lava Buckets and Blaze Rods cannot be used in the Steam Dynamo. For generating energy with the latter two, use the Magmatic Dynamo. 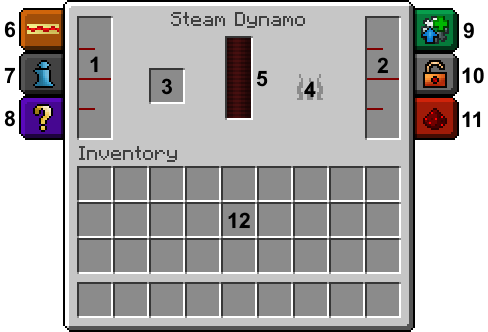 1. Steam Tank
Steam that is to be consumed for generating energy is stored here. Slowly drains if the Dynamo is inactive.
2. Water Tank
Water that is to be heated into Steam using fuel items is stored here.
3. Fuel Slot
Items placed in this slot are consumed as fuel to produce Steam.
4. Fuel Gauge
Displays the progress of the fuel item currently being burned.
5. Energy Gauge
Displays how much Redstone Flux is currently stored in the Steam Dynamo's internal energy storage.
6. Energy Tab
Displays how much power the Steam Dynamo is generating, and how much Redstone Flux is currently stored in it.
7. Information Tab
Displays a bit of information about the Steam Dynamo.
8. Tutorial Tab
Explains various things about the Steam Dynamo and the other tabs in the GUI.
9. Augmentation Tab
Allows installing Augments in the Dynamo.
10. Security Tab
Allows setting who is allowed to access the Steam Dynamo. Only available if a Signalum Security Lock is installed.
11. Redstone Control Tab
Allows setting how the Steam Dynamo responds to Redstone signals. Only available if the Integrated Redstone Circuit Augment is installed.
12. Player Inventory
The inventory and hotbar of the player that is accessing the Steam Dynamo.