It slices! It dices! It pours things, it throws things!

The way the Autonomous Activator uses items is highly configurable. The Device can be set to simulate left clicks or right clicks. It can also be set to act as if the simulated player is sneaking. Lastly, the Activator can be set to aim high, low or at the same level.

The Activator uses 20 RF every time it attempts to use an item; even when no items are available to use. In the config, the Device can also be set to use more energy when actually using items.

When placing blocks, the Activator always tries to place two: one in the direction it is set to aim, and one below that. The lower block is always placed first if possible.

When performing an action that involves holding down a mouse button, like using a tool to break a block, the Activator uses the same amount of energy every tick while using the item. 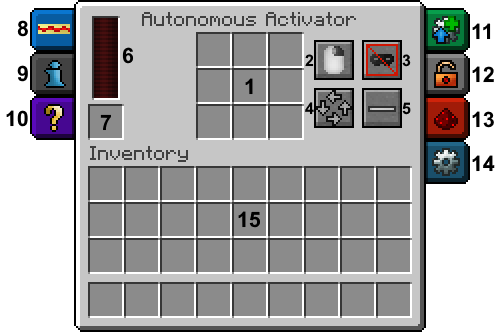 Some sides of the Autonomous Activator can be used to insert items into it or to extract items from it. These sides can be identified by color-coded openings in the sides of the Device.

If the Integrated Modular Framework Augment is installed, this feature of the Activator can be configured. Some things can be inserted from any side.