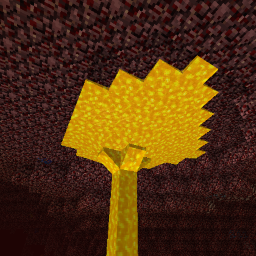 So that's how those formations occur! It all makes nonsense now!

The following table lists some details of Energized Glowstone. The same details for Water and Lava are included for comparison.

When placed, Energized Glowstone tries to flow upwards at a semi-slow rate. The way the fluid flows is a lot like Water, except upside down. If there are no blocks in the way, the source block itself will also gradually 'fall' upwards. When a source block is high up in the air, it eventually condenses into a block of solid Glowstone.

Because Energized Glowstone is gaseous, it cannot be swum in. However, it does slow the fall of any entities inside it. It also applies two potion effects for a short while upon contact: Speed I and Jump Boost I.

Energized Glowstone can be 'drunk' using a Straw. When done so, it applies three potion effects: Speed III, Jump Boost III and Night Vision, all of which last one minute.