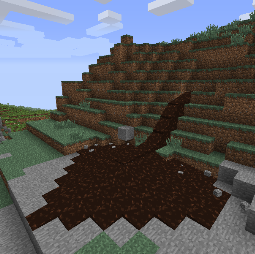 Tectonic Petrotheum is a fluid that is produced when Petrotheum Dust is molten down. It is the earth elemental fluid. It currently doesn't have any real uses, but it is planned to get some in later releases.

The following table lists some details of Tectonic Petrotheum. The same details for Water and Lava are included for comparison.

When Tectonic Petrotheum is placed down, it flows a lot like Water does, though a bit slower. Source blocks of the fluid also gradually fall downwards if there are no blocks under them.

Tectonic Petrotheum cannot be swum in; entities can move through it freely, as if it is not even there. However, it does apply three potion effects for half a minute upon contact: Night Vision, Haste III and Resistance II.

The fluid turns any Stone, Cobblestone, Stone Bricks and Moss Stone blocks that are next to it into Gravel. If enabled in the config, Tectonic Petrotheum instead breaks adjacent Stone and similar blocks completely, and drops them as items.

Tectonic Petrotheum can be drunk using a Straw. When done so, the player is dealt a bit of damage, ignoring any worn armor. The player is also given a Haste IV effect and a Resistance III effect, both of which last five minutes.