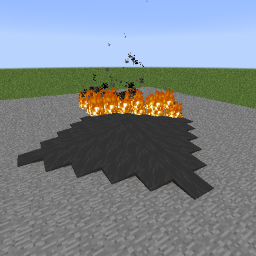 Liquifacted Coal is the result of melting down Pulverized Coal into a fluid. It is very flammable, and therefore the fluid is commonly used as fuel.

The following table lists some details of Liquifacted Coal. The same details for Water and Lava are included for comparison.

Liquifacted Coal has no use other than being usable as fuel in Compression Dynamos to produce Redstone Flux. However, this single use is very useful as it makes using Coal as fuel much more efficient.

When placed, Liquifacted Coal flows similarly to the way Water flows, except a bit slower. The fluid can easily be set on fire. Flowing blocks of the fluid can be destroyed by fire, but source blocks cannot.

Liquifacted Coal can be drunk using a Straw. When done so, the player is given a Haste I potion effect that lasts for one minute.