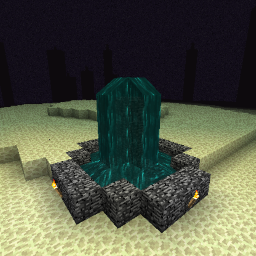 Resonant Ender is the result of Ender Pearls being molten down into a liquid mass. This fluid has teleporting powers that are more volatile yet easier to harness than those of solid Ender Pearls.

The following table lists some details of Resonant Ender. The same details for Water and Lava are included for comparison.

Resonant Ender is a critical ingredient in creating Tesseracts; devices that can teleport things over large distances. It can also be used to create Enderium, a very strong alloy. Furthermore, it can be pumped into Plate Frames to create Translocation Plates. Lastly, Sandstone can be infused with Resonant Ender in a Fluid Transposer to create End Stone.

When placed, Resonant Ender flows a lot like Lava does in the Overworld, at a somewhat slow rate. Entities that touch the fluid will be teleported around randomly, in a range of about eight blocks.

Resonant Ender can be drunk using a Straw. When done so, the player usually teleports a very long distance away (up to around sixteen thousand blocks by default). However, this might fail if there are blocks in the way of the randomly chosen destination. If this happens, the fluid simply condenses into a few Ender Pearls that are then given to the player.