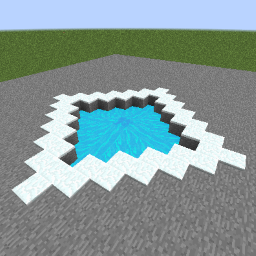 This is also worse than Lava, except cold. You yeti.

Gelid Cryotheum is a fluid that is produced when Cryotheum Dust is molten down. It is the water/ice elemental fluid. The fluid is said to be worse than Lava, except very, very cold.

The following table lists some details of Gelid Cryotheum. The same details for Water and Lava are included for comparison.

Because of how cold it is, Gelid Cryotheum can be used as very effective coolant in Compression Dynamos. It can also be used to create Cryo-Stabilized Fluxducts, that can transport any amount of Redstone Flux.

When Gelid Cryotheum is placed down, the way it flows is very similar to the way Lava flows, except more slowly. Source blocks of the fluid also gradually fall downwards if there are no blocks under them.
It is impossible to swim upwards when submerged in Gelid Cryotheum.

Gelid Cryotheum also interacts in specific ways with some entities or blocks that it touches:

Gelid Cryotheum can be drunk using a Straw. When done so, the player is dealt quite a bit of damage. However, it also extinguishes the player if they are on fire, and gives them a Fire Resistance effect for eight minutes.